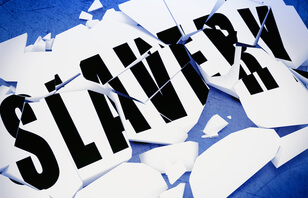 Today is Election Day – and it’s also the close of a Government consultation on the transparency in supply chains (TISC) clause in the new Modern Slavery Act 2015.

I’m sure we’ll see lots of U-turns in the coming days and months after the election. Happily the Government’s U-turn on the Modern Slavery Bill (MSB) was one of the more welcome and positive ones that took place relatively recently. I also think it was a significant success story as far as joint policy advocacy and influencing is concerned.

As with other issues associated with human rights, modern slavery is an incredibly complicated, technical, and hidden issue. There are however more people in slavery today than at any other time in human history. It is also one of the worst human rights violations that persist today. From a business perspective it includes labour trafficking, slavery, and forced or compulsory labour. Other forms of modern slavery are likely to be less relevant to the business environment such as sex trafficking and domestic servitude.

When the MSB was published in December 2013, it included no supply chain provisions. This was despite significant objection from a number of parliamentary bodies, leading anti-slavery organisations and business leaders. Sticking with an increasingly ‘anti-regulatory’ stance from Westminster, the Home Office felt that asking business to look for slavery in their supply chains would be too much of a ‘burden’.

It was felt by many that the Government had missed an opportunity to introduce world-leading legislation by failing to include anti-slavery measures for business.

Sticking to their guns

The Government stuck to their guns though and instead sought a voluntary approach with industry.

Last summer, I attended a number of multi-stakeholder sessions organised by the Home Office who were looking to secure such an agreement with business leaders. In parallel the MSB was being scrutinised by the House of Commons Public Bill Committee.

There was significant push back by industry and civil society on the Government’s proposals for a voluntary agreement – including by the retail organisation I was representing. There were a number of reasons for this. For example, some UK businesses have social compliance programmes, but the vast majority do not. A voluntary agreement would not change this. Mandatory legislation was needed to provide a regulatory framework that helped level the playing field for all UK companies.

The Government maintained that there was already adequate legislation in place. In particular, the Companies Act had introduced human rights reporting obligations in 2013. This legislation, however, is inadequate for a number of reasons. It does not create fair competition as it only applies to the biggest publicly traded companies. The legislation is also silent on what companies should report on. And there is no explicit mention of ‘supply chains’ and Government guidance is virtually non-existent. It was also argued that the EU Non-Financial Reporting Directive set to come into force in 2016 would require reporting on human rights – again this would be quite limited and only apply to certain companies.

As a result of significant and targeted pressure by politicians, leading NGOs and many major brands and retailers the Government finally caved in and agreed to introduce a TISC provision in the MSB in October 2014. There would be an annual duty of disclosure over the steps businesses have taken to ensure their supply chains are ‘slavery free’. They promised to consult on the specifics of what was proposed – in particular the exact threshold for the size of business that the new duty of disclosure would apply as well as what information might be disclosed.

The multi-stakeholder group I was involved with were of course amongst many who were calling for this amendment. And as joint efforts at policy advocacy and influencing go this was a real achievement.

Towards a level playing field

The new TISC provision applies to commercial organisations (corporate bodies and partnerships – wherever incorporated or formed) over a certain turnover, which carries out a business or part of a business, in any sector in the UK.

These businesses will be required to publish an annual slavery and human trafficking statement on their website (or respond to a request within 30 days where they don’t have a website). They must describe the steps they have taken to ensure that slavery or human trafficking is not taking place in their own business or in their supply chain. They can also simply opt to say that they have taken no such steps.

The provision is partly modelled on arrangements in California where it applies to businesses that produce products for sale to the public where worldwide gross receipts exceed $100m (around £60m). The UK legislation goes further as it applies regardless of the nature of the company or what it supplies, whether products or services.

We will have to wait and see what the outcome of the consultation is on the UK threshold. However, the Government has stated a preference for the provisions to apply to larger businesses only. This could mean the lowest the threshold would be is £36m – one of the Companies Act thresholds for large companies. Many would of course no doubt like the provisions to apply to more smaller and medium-sized organisations.

What is disappointing though is that the TISC provision does not currently extend to the public sector. At meetings I attended last year it was acknowledged by all parties (including Government) that this was not just a private sector issue – the public sector also needed to play its part. I was told recently that the Government’s approach to modern slavery and public sector procurement is set out in the Government’s Modern Slavery Strategy (page 58). Apparently they intend to take steps to develop a pan-Government approach to procurement ‘by requiring those bidding for Government contracts to satisfy Government departments of their commitment in this area before contracts are awarded’. Whatever that means. I see no reason though why the same disclosure obligations can’t be imposed and a similar threshold set (e.g. £36m) for public sector organisations based on annual procurement spend (for instance).

Those responsible for businesses, such as company boards and directors, will be obligated to sign any slavery and trafficking statement that is produced.

The Government also intend to produce statutory guidance to help businesses understand what this statement might include. They sought views on the extent to which the statement should include information on:

The TISC provision will be commenced through secondary legislation alongside the statutory guidance – the requirements are currently expected to come into force in October 2015. Of course with the close of today’s consultation, it will be down to the new Government to decide how to take this work forward. This will be interesting – not least to see what they propose to do about monitoring of compliance – will a central online repository for annual statements be set-up for instance?

Step in the right direction

Clearly the TISC provision will not lead to systemic change and eradicate modern slavery – not in its own right. Social compliance programmes are not necessarily that effective in picking up issues like trafficking or forced labour. These are not isolated instances by a small number of unscrupulous individuals or businesses. It is an endemic problem that occurs all along the supply chain, often outside the scope of a company’s usual operating remit. It would require a different approach to make it harder for workers to be exploited. As with most sustainability issues this cannot be left to any one organisation to solve. Any private sector mechanism would need to be supported by an effective regulatory system – ideally pan-national.

That being said, I am hopeful though that it will help shift the focus away from high street retailers and brands (who tend to get much of the flack when things go wrong – remember Thai prawns?) and get conversations going in other sectors that are not really doing much on managing human rights issues at all.

Despite all its drawbacks, TISC is very much a step in the right direction in my view.